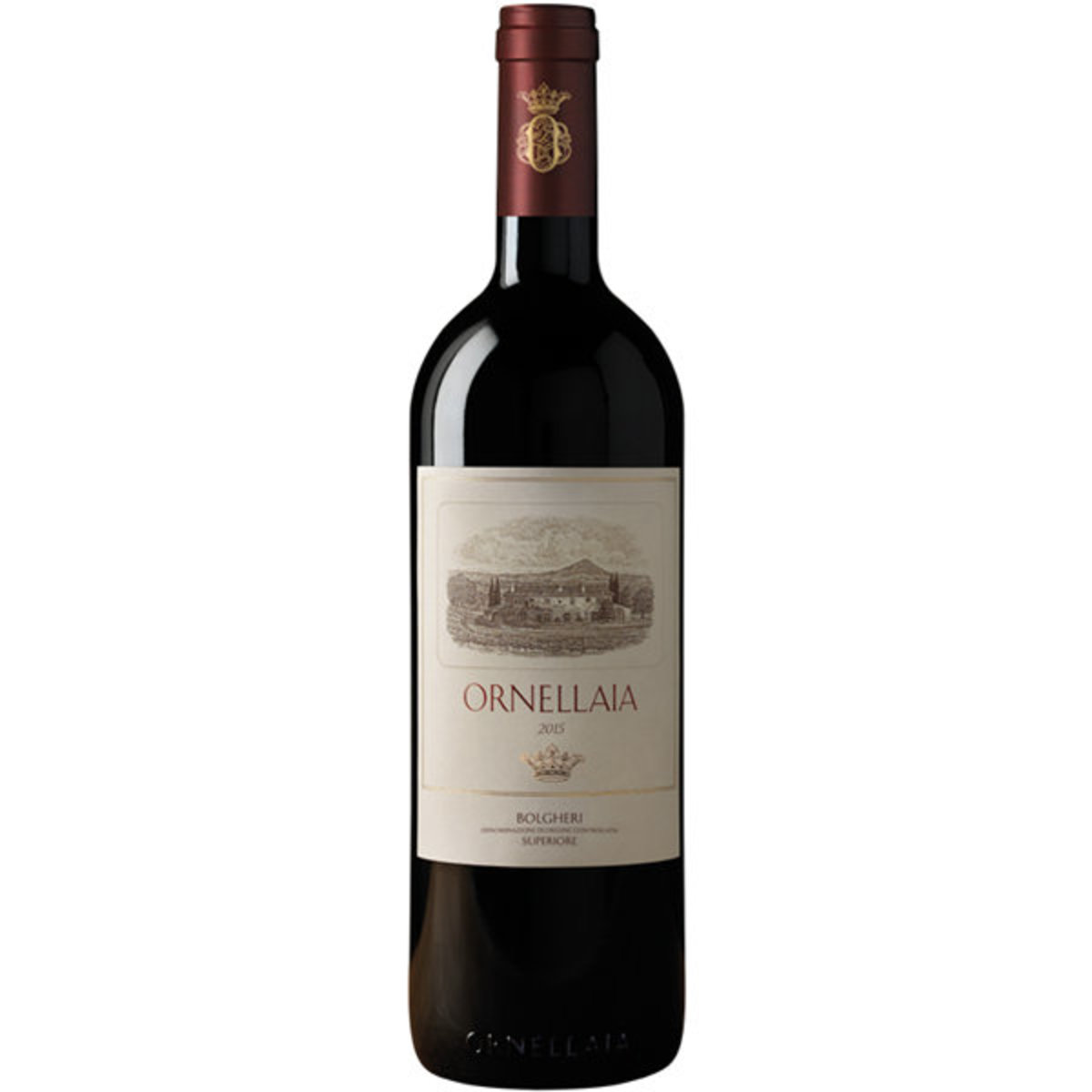 The desire to nurture the Estate’s exceptional qualities has shaped Ornellaia’s philosophy since the beginning. Ornellaia is a cuvée of Cabernet Sauvignon, Merlot, Cabernet Franc & Petit Verdot and the faithful expression of unique terroir developed in harmony with nature.


WINEMAKER TASTING NOTES
53% Cabernet Sauvignon, 23% Merlot, 17% Cabernet Franc, 7% Petit Verdot
‘Like people of great ‘Carisma’ (Charisma), wines of great vintages know how to impose themselves naturally, without force, their balance allowing them to shine without having to flaunt themselves. The 2015 vintage perfectly expresses this behavioural trait. Born during a particularly balanced harvest season, 2015 is certainly one of the great Ornellaia vintages. The usual intense colour indicates a wine of great texture and intensity, followed by a fruity scent that is ripe and fresh at the same time, emphasized by classic balsamic and spicy hints. On the palate it is rich, dense, and full-bodied, with an exceptional tannic texture, dense and velvety, of great refinement, that extends throughout the mouth. The long finish concludes with a feeling of firmness and finely spiced hints.’
Axel Heinz - May 2017

THE CLIMATE OF 2015
After the unusual 2014, the 2015 vintage proved to be very regular, almost “textbook” like. After a normal, rainy, mild winter, with just a couple of days with temperatures below zero, the budding arrived on time in the first days of April. Spring was characterized by a dry and sunny weather, ideal conditions for a regular vegetative development, that culminated in a fast and complete blooming at the end of May. Starting in June, water stress gradually became an issue. July will be remembered as particularly scorching and dry, with maximum temperatures that exceeded 30°C every single day of the month. The heat, combined with the absence of rains, made us fear an interruption in the ripening process and possibly an early harvest. Luckily rain came around the 10th of August, with abundant precipitation allowed the grapes to continue ripening, also bringing a much cooler weather during the final stages. This cool yet sunny weather persisted throughout the harvest, allowing us to pick very slowly, waiting for every vineyard to arrive at the perfect point of ripeness, combining a fresh and lively aromatic quality with a perfect phenolic maturation with abundant yet silky and soft tannins. We began on the 29th of August with the Merlot, and ended on the 12th of October with the last of the Cabernet Sauvignon and Petit Verdot.

VINIFICATION AND AGEING
The clusters were hand-picked into 15-kg boxes and then selected by hand on a double sorting table, before and after destemming, and finally softly crushed. Each grape variety and single vineyard block was vinified separately. Fermentation took place in stainless steel tanks at temperatures between 26-30°C for two week, followed by 10-15 days of maceration on the skins. The malolactic fermentation took place mainly in oak barrels, 70% new and 30% once-used. The wine then remained in barriques, in Ornellaia’s temperature- controlled cellars for about 18
months. After the first 12 months of maturation, the wine was assembled and then returned to the barriques for an additional 6 months. After bottling, the wine aged a further 12 months prior to release.

• Products in this store, unless specified, are sold to you by HKTVmall.
• In situation where there are limitations, price, promotion offers and other marketing campaigns on the HKTVmall may varies from retail stores, the terms and offers are only applicable to HKTVmall.
• Our store will protect your personal Information in accordance with the relevant provisions of the Personal Data (Privacy) Ordinance and in accordance with HKTVmall Privacy Policies.
• Specification shown may be different from actual products.
• In the event of dispute, HKTVmall's decision shall be final and conclusive.

• Our products will be delivered by HKTVmall please refer to Shipping Information for more details.
• Actual delivery time depends on the products ordered and the shipping time of the particular merchants.
• Shipping time of this store: Monday to Friday excluding Public Holiday 9am.
• All products are non-returnable.

•All products are opened cannot be refund or exchange.
• In the event of dispute HKTVmall's decision shall be final and conclusive.